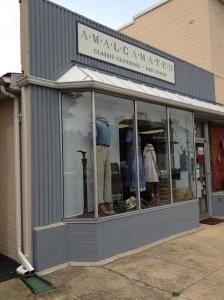 I have anticipated checking out Alexandria’s Amalgamated Classic Clothing and Dry Goods since April, when I heard of its opening shortly prior to DCLX and the wonders that awaited me – rumors that the owners have a warehouse where items are pulled for Hollywood movies, that the inventory has real swing era stuff, GOOD stuff, and I was salivating. As I ditched the Saturday afternoon DCLX dance to head over to Alexandria I got a text message from Bill Speidel that the shop was closed. Oh, the disappointment!

Thankfully, I had already planned to attend the International Lindy Hop Championships in August, so I knew I’d get a second chance. I messaged the store’s Facebook page a few days prior to the event to make sure that they would be open and should I send my measuremnets. The answers were yes and yes, and I was elated.

I planned to go on Friday of ILHC and at the Thursday night dance I met Beth Midavaine, who had also planned to take a trip to Amalgamated with Bill Speidel, but Bill had bailed on her, so it seemed that fate would have it that we go shopping together. We headed to Amalgamated the next day with Jason Sager and arrived at the store at noon on the dot. The store was closed. I was frantic. We went next door to a knick knack store owner, who didn’t know why the shop wasn’t open. As we regrouped on the sidewalk, the door opened to Amalgamated and it was, after all, open for business. *phew!*

It took us three hours to get through everything in the store and try on the rack of clothes that Beth and I accumulated through our collective digging through the store. The store itself is small is square footage, but packed with everything good – there was no small rack where the few swing era items were delegated – the entire store was pre-1960’s, so 100% of their inventory was everything that you would want to see in a vintage store. It was glorious! The men’s section rivaled the women’s section in size and magnificence (who has an entire rack devoted to two tone Ricky Ricardo jackets?) and a men’s shoe section that took up an entire table, and included children’s shoes (tiny leather and mesh oxfords!). Owner Shelley White took us through boxes in the back room filled with delicate 1920’s beaded dresses, there were racks of glorious dresses and gowns, plus some very practical items that would be perfect for dancing. The women’s shoes had a good selection of larger women’s sizes, which was great for Beth, who picked up a pair of fantastic 1940’s heels.

I don’t think words or photos will do this place justice, so you’ll just have to go and see for yourself. Until then, check out some of our finds below: