I have been on the hunt for knitwear to pair with my Chloe Hong trumpet skirts to transition them into winter and fall. My conclusion is that most of the great knitwear I am finding is coming from the UK, so let’s start with one of my new favorite knitwear sources, Collectif Clothing. What’s this all about? From the website: “Established in the year 2000, Collectif is an independent 1940s and 1950s inspired vintage reproduction brand based in London. We create garments and accessories that are inspired by genuine vintage patterns, knitting patterns, and fabrics from our extensive archive.”

Of course there’s much more than knitwear here, and I’ve seen a few pieces pop up on other vintage/retro retail websites, like ModCloth and Miss L Fire (US shipping!). From blouses to knitwear to gowns to overalls, I love the variety available here – there’s lots of really good everyday basics to work into your wardrobe, casual or dressy, and you could put together an entire ensemble here or just pick up a few special pieces. Also, plaid…keep it coming, I can never get enough!

Here are some of my favorites from Collectif Clothing:

It was another wonderful year at Richmond, Virginia’s Jammin’ on the James, both the dancing and the shopping. Some of my favorite vintage shoppers – Lily Matini, Elizabeth Aldrich, Bill Speidel, and, a new addition to my vintage cavalry, Josephine Stewart – made cameos at the event this year and it made Saturday an exciting and bustling day at the vintage shops in Richmond. I reported on my trips to Richmond’s two best vintage shops, Halcyon and Bygones, after last year’s Jammin’ on the James, but there’s always new inventory to scout.

Halcyon is my favorite Richmond store because it is so inviting – beautifully decorated, not too large/too small/too crowded, with a carefully chosen selection of garments that leaves you with the feeling that the entire store is filled with the “good stuff,” no filler. This year was no exception and I left with one beautiful 1930’s dress, but there were several other things I probably could have taken home if the budget had allowed. After we expressed interest in ties, Angelica from Halcyon pulled out the hidden rack of beautiful 1930’s ties, including one with circles and butterflies that Bill and I both claimed, but, ultimately, Bill won out because my husband wouldn’t answer his phone to tell me if he would wear the tie. Bill also scored a vintage Alexander Calder inspired tie by Carnival Jones, Elizabeth left with a lovely black faux fur jacket, and I left with a 1930’s silk dress. There were some really lovely pieces from a Richmond estate, including a 1920’s dress that must have had over 100 green bakelite buttons down the front and both sides.

Next stop was Bygones, which is famous for its window display and top of rack displays. This season’s display did not disappoint, with an Egyptian revival-themed window-dressing and an inside display of furs and faux animals that just begged for some taxidermy or, as Bill said, the barrel of a shotgun peeking out from between the furs. Josephine had great luck here, asking for tiny sized clothing and they definitely delivered. Favorite pieces included two 1940’s suits, one in light aqua velvet with quilting detail on the jacket and another in green silk velvet with amazing trim detail on the jacket.

Check out the goods from the photographs below!

I love vintage with a story – these pink satin 1920’s shoes were an adventure to find. If you’d like to own these beauties (approximately a size 5N, 9 inches long inside, 2.5 inches wide), they are yours for the cost of shipping.

So here’s the story: Raleigh/Durham dancer and advertising whiz kid Jamie Foehl invited the local dancers to be in a commercial set in the 1920’s for her job. On a very cold morning this past March we set out in cloches and derby hats for a farm in Chapel Hill, which would be the site of the commercial. I can’t reveal too many details about the commercial, but the farm itself was an interesting backdrop, with beautiful scenery, a lake, a giant catapult, a miniature horse, and enough horse poop to make walking around in Remix shoes very challenging. The owner of the farm came over to a group of us in vintage clothing and said “I’ve got some old clothes and jewelry from my husband’s aunt in the house that we’ve been trying to get rid of. Would you be interested?” 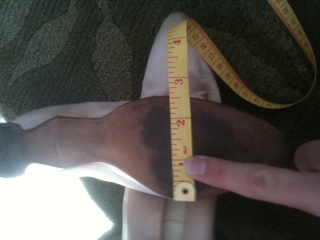 The answer is always YES, even if it turns out to be a bust.

This time, yes meant coming inside to a fire in the fireplace and a downstairs closet with hidden treasures. She pulled out the jewelry first, which was mostly 1960’s and 70’s stuff, but I did snag some MCM cufflinks for the Boy. I think the pink shoes were next and they were carefully boxed and preserved, in all their pink glossy glory. Next came the fur muffs (there were two), so Jamie and I each got one of those to take home. Finally, a WWII army nurse’s cape made its way out of the closet and into my arms. Now, I just have to find the rest of the uniform. 😉 There were also hats, but apparently the hats were in a closet in a bedroom where someone was sleeping (Jamie, any follow up on that?). Needless to say, it was a very successful day that ended with pizza for lunch and a bowling ball being catapulted across the field.

And that’s how we got these pink shoes…but what to do with them? They need a very special home, so I’m hoping someone reading this blog has tiny feet.